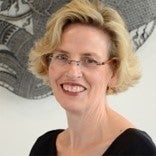 Annette Dixon is the Vice President for Human Development at the World Bank Group, overseeing the Global Practices for education; health, nutrition, and population; and social protection and jobs.

Annette Dixon is the Vice President for Human Development at the World Bank Group, overseeing the Global Practices for education; health, nutrition, and population; and social protection and jobs.

She was previously the World Bank's Vice President for the South Asia Region. In managing the World Bank’s engagement in South Asia to end extreme poverty and boost shared prosperity, Annette leads relations with eight countries including India, the institution’s biggest client. She oversees lending operations and Trust-Funded projects worth more than $10 billion a year. Before joining the region, Annette was Director, Strategic Planning in the Budget, Performance Review and Strategic Planning Vice Presidency. Her career at the World Bank has included senior positions that have given her broad and deep experience with sectors, countries and management issues within the World Bank Group.

A citizen of New Zealand, Annette joined the Bank in 1999 as a Sector Manager in Human Development in the Europe and Central Asia (ECA) Region.  She has since held various leadership positions, including Sector Director of Human Development and Strategy and Operations Director in ECA.  From 2008 to 2013, she held the position of the Country Director for South East Asia (covering Cambodia, Laos, Malaysia, Myanmar, Thailand, and the Greater Mekong Sub-Region), in the East Asia and Pacific Region (EAP).  Prior to that, she was a Country Director for Central Asia in ECA.

Before joining the World Bank, Annette Dixon worked for the Government of New Zealand as Chief Executive of the Ministry of Youth Affairs.  She also served as General Manager, Sector Policy; Deputy Director-General in the Ministry of Health; Director of Health Policy, Department of the Prime Minister; and Manager Policy Division, Ministry of Women’s Affairs.

Born in Palmerston North, New Zealand, Annette holds a Master of Public Policy in Politics, Economics and Law from Victoria University in Wellington.  She was also awarded the Harkness Fellowship in Health Policy and Management at the George Washington University in 1994-1995.