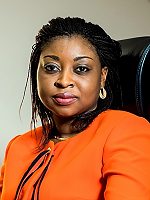 Mrs. Aurelie Adam Soule Zoumarou is a skilled Telecommunications and ICTs professional who has built up an experience in the ICT industry (SFR France, Accenture France, ARCEP Benin, GSMA Africa).  She started out with SFR France before heading to Accenture France as a Consultant in Information System. She returned to Benin in 2008 and devoted her time and work at the Regulator’s Office ARCEP BENIN. She played an active role in the participation of Benin and Africa in the 2015 ITU World Conference in 2015. As senior policy Manager for GSMA Africa, she contributed into bringing mobile services to 635 million Africans until then without fair access to internet.

Her academic background includes a Master’s degree with a focus on Telecoms and ICT Engineering from Telecom Sud Paris and a Certificate in Management of Public Policies and Leadership from Maxwell School of Citizenship and Public affairs of Syracuse University (New York). Currently, she is enrolled in a Ph.D program in Information Science and Communication at the University of Bordeaux in France.