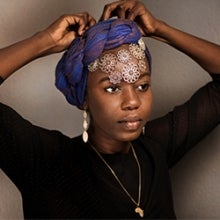 UNHCR Goodwill Ambassador and World Champion Poet, Emtithal (Emi) Mahmoud continuously advocates for the cause of refugees and disadvantaged communities the world over through her poetry and incredible experience.Leer más >

UNHCR Goodwill Ambassador and World Champion Poet, Emtithal (Emi) Mahmoud continuously advocates for the cause of refugees and disadvantaged communities the world over through her poetry and incredible experience. Named one of BBC's 100 Most Inspirational Women, Emi co-founded an international Sickle Cell research initiative at age 19 and has since worked with President Obama, the Dalai Lama, the UNHCR, the Fletcher School of Law & Diplomacy, Google Zeitgeist, The Institute for Inclusive Security, Gates Grand Challenges, The Hilton Foundation, The American Academy of Arts and Sciences, and more.

A TED Speaker, award-wining slam poet, and author, Emi has repeatedly moved audiences to tears—and to their feet— at the UN General Assembly, The World Economic Forum in Davos, Forbes 30 Under 30, and countless other high-level events. Her first book Sisters' Entrance was released in May of 2018. That same year, she walked 1000km (620miles) in 30 days cross Sudan, mobilizing thousands of people along the way. In 2017, she hosted the first fully inclusive civilian peace talks in Darfur before starting the One Girl Walk. Emi uses grass-roots activism to organize, motivate, and mobilize thousands toward change across the world. From her landmark civilian peace talks, to multiple field missions with the UN Refugee Agency and more, Emi has become an expert on catalyzing change. She graduated from Yale in 2016 serving as the Class Day poet and speaker.