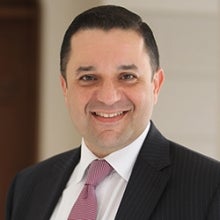 Dr. Al-Ississ has extensive experience in academia. From 2010-2016 he was an Assistant Professor and Associate Dean at the American University in Cairo, as well as a visiting lecturer at Harvard Kennedy School. He is also a founding professor of the first massive Arabic course at Edraak, an online learning platform in partnership with Harvard University and MIT’s EdX platform.

Dr. Al-Ississ is a member of the Global Agenda Council at the World Economic Forum, a Fulbright scholar, and a published author on a range of topics including the elasticity of trust, the impact of faith on economic behavior, health reform, and aid allocation.