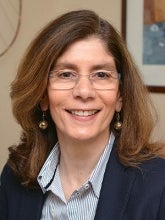 Pinelopi “Penny” Koujianou Goldberg is the Chief Economist of the World Bank Group.

Pinelopi “Penny” Koujianou Goldberg is the Chief Economist of the World Bank Group.

She is on public service leave from Yale University, where she is the Elihu Professor of Economics. She is former Vice-President of the American Economic Association and President elect of the Econometric Society (for 2021). She is a member of the American Academy of Arts and Sciences, a recipient of both Guggenheim Memorial Foundation and Sloan Research Fellowships, and recipient of the Bodossaki Prize in Social Sciences. She is also a research associate at the National Bureau of Economics Research (NBER – currently on leave) and board member of the Bureau of Research and Economic Analysis of Development (BREAD). From 2011-2017 she was Editor-in-Chief of the American Economic Review. She has published widely in the areas of applied microeconomics, international trade, development, and industrial organization. She holds a Ph.D. from Stanford University and a Diplom from the University of Freiburg, Germany.