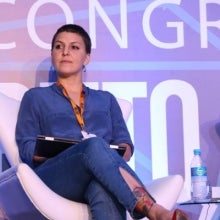 Yasodara Córdova is a Senior Fellow Researcher at the Digital Kennedy School, a Belfer Center project, at Harvard and an affiliate at the Berkman Klein Center. Her research comprises Citizenship, Digital Democracy, and Participation.Leer más

Yasodara Córdova is a Senior Fellow Researcher at the Digital Kennedy School, a Belfer Center project, at Harvard and an affiliate at the Berkman Klein Center. Her research comprises Citizenship, Digital Democracy, and Participation. She is an activist, software developer, and Industrial Designer that is part of several Civil Society organizations, as she is on the Director’s board of the Ciudadania Inteligente, and is a former Director of the “Serenata de Amor Operation”, an anti-corruption A.I. platform that uses machine learning and open data to facilitate social control of the public representatives in Brazil. Yasodara was invited to present this successful project in the Brazilian Congress in 2017. She was selected as a Fellow of the Berkman Klein Center in 2016, but before that, Yasodara worked as a Web Specialist at the World Wide Web Consortium, as the chair of the Data on the Web Working Group.  For more than eight years, working closely with several ministries in Brazil and the Brazilian presidency, she developed platforms for citizen participation as a technical innovation consultant for the United Nations. Earlier, she worked with data visualization and was awarded twice the biggest Brazilian prize in Journalism and Human Rights, the Vladimir Herzog Award. She collaborated with the Coding Rights, an awarded Brazilian think-tank, part of the Privacy International Network.

In the same way, she worked with several organizations, like the InternetLab, Tactical Tech Collective, Avaaz, in several roles. She is one of the first female Hackerspace founders in Brazil and was part of the advisory board of the Open Knowledge Foundation Brazil until 2017. Finally, Yasodara is recognized internationally for her multidisciplinary vision over the digital changes happening systemically on the Internet. She has the expertise of a practitioner, the passion of an activist, and the knowledge of a Harvard Researcher.