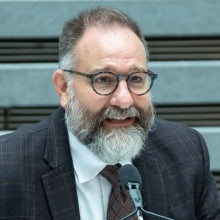 Prior to joining the Bank, Clif served as the United Nations Development Programme (UNDP)’s Deputy Director for Health and UNDP’s Global LGBTI Lead (2014-16). Based at UN headquarters in New York City, Clif led UN efforts to ensure inclusion for LGBTI people in global development, in particular as it related to the Sustainable Development Goals.

Prior to UNDP, he was part of the U.S. Agency for International Development (USAID)’s HIV response, first as part of the Office of HIV in Washington, DC, and later in the Regional Development Mission Asia in Bangkok. Over 23 years, his work has taken him to countries throughout Asia, the Pacific, Latin America, Eastern Europe, the Caribbean and Africa. Clif holds a law degree from Georgetown University in Washington, D.C., and is married to Owen